Featured Paper: The Risk Of Curtailment Under The Colorado River Compact 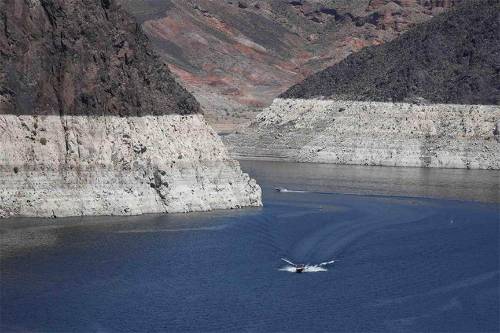 This paper is intended to inform negotiators and interested citizens about the future
risk that Colorado River-sourced water rights won’t be available. Coupled with a
cost-benefit analysis, this risk assessment can be a foundation for assessing
proposals for Colorado River operations and insurance policies.

When we’re thinking about life insurance, we calculate, even if subconsciously, the odds we’ll need it. How’s my health? What happens to my family if I’m not around? How dangerous is my job? The risk we perceive determines how big a policy we want and how much we’re willing to pay. But these are uncomfortable questions we’d rather not think about, and tend to avoid.

When considering the future of the Upper Basin of the Colorado River, we need to do the same, even though the answers can be unpleasant. If we do nothing and the water runs short, will we get the water we need? What are the risks we won’t? What can we do to mitigate the risk? An objective risk assessment is needed so we can make good decisions about the right amount of insurance against catastrophic loss, or a decision to forego insurance and go bare.

Despite almost one hundred years of reliance on the 1922 Colorado River Compact, there are a number of fundamental questions and disagreements about key terms. The interpretation of these provisions has profound impacts on the obligations of the Upper Basin states and, therefore, on the risk of curtailment. The legal ambiguities include:

A repeat of drought conditions seen in the first decade of the 20th century could nearly empty the Upper Basin’s primary storage reservoirs. While the risk of that happening remains low in the shortterm, the threat increases substantially over time, and regardless of the time frame, the consequences could be dire. The paper describes the latest Colorado Basin science and translates it into the risk of curtailment. 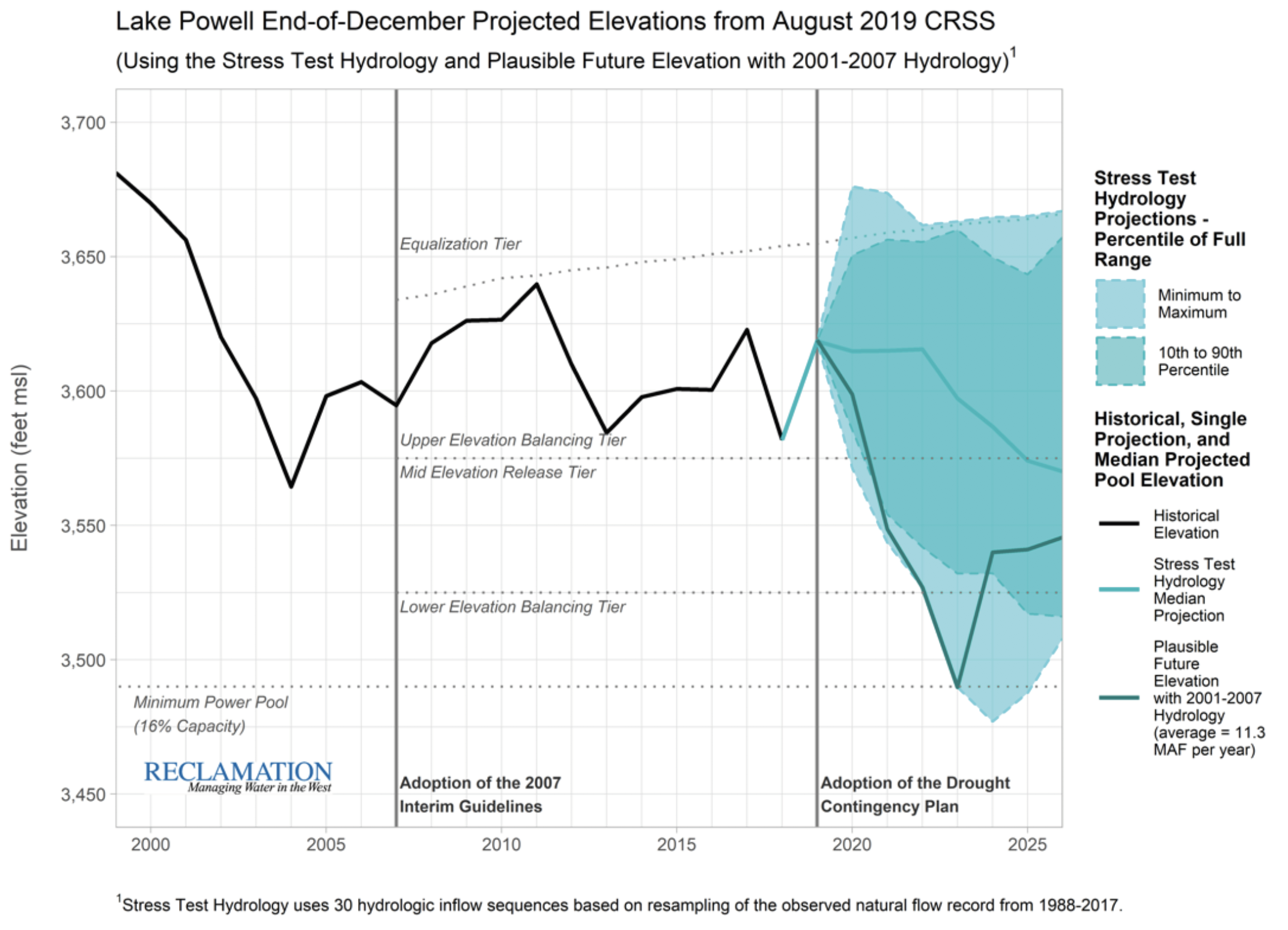 The best hope for avoiding curtailment rests in the continued efforts of Colorado River water managers to cooperatively reach agreements that bring better balance to the system through voluntary cutbacks in the amounts of water delivered and used. There is a history and culture of collaboration in the Basin and, therefore, reason to expect that Colorado River water leaders will devote considerable effort to reaching a negotiated solution that decreases the risk of curtailment. There are, however, forces pushing in the opposite direction that could increase Upper Basin risk.

The details of how Compact curtailment would be administered within Colorado have not been spelled out by the Colorado State Engineer’s Office. But the most obvious means of administration would be based on prior appropriation, the mechanism through which all Colorado water rights are administered. Only water rights that are junior to the 1922 Compact are subject to curtailment. It has been estimated that approximately 1.6 to 1.75 million acre feet of Colorado River water use in Colorado (out of an annual total of about 2.5 million acre feet) is considered pre-Compact and not subject to curtailment. That’s the good news. The bad news is that the burden of curtailment will fall on the much smaller quantum of post-Compact rights. Significant curtailment reaching far into the seniority ranking may be necessary to achieve reductions required for Compact compliance.

The burden of curtailment would fall heavily on municipal transmountain diversions to the East Slope. While that might sound superficially attractive to West Slope agricultural interests, such a prospect could motivate affected municipal water providers to buy or lease pre-Compact West Slope irrigation water rights, possibly in substantial volume. Although these would almost certainly be market-based, arms-length transactions, the resulting economic impact could be geographically concentrated and tremendously disruptive to commodity supply chains and rural communities.

Litigation – Not A Silver Bullet

The paper cautions against litigation against the Lower Basin states of Arizona, California, and Nevada as a path to settling the legal ambiguities. Such an interstate lawsuit could drag on for many years in the U.S. Supreme Court, creating even more uncertainty and hindering the types of collaborative agreements that have kept the River sustainable so far. None of the legal arguments is bullet-proof and frequently the questions initially asked remain unanswered even after years of fighting. The risks are massive in terms of time, resources, uncertainty of outcome, and depletion of political capital. It is wildly impractical to believe that the legal haziness surrounding the 1922 Compact and subsequent statutes can easily be resolved through litigation.

Even if the risk of curtailment of Colorado River rights were judged to be low, the consequences are not. Curtailment could result in dire consequences to municipal providers and their customers and farmers and ranchers on the West Slope, with the attendant loss of economic activity, jobs, income, and community benefits in cities and rural areas that depend on the water. Analyzing a range of possible futures and setting up contingency plans for those with calamitous consequences is prudent. A contingency plan is a form of insurance against catastrophic events.

Demand management is being investigated in Colorado and the other Upper Basin states as one form of insurance policy. This type of voluntary, temporary, and compensated water conservation would create a pool of water in Upper Basin reservoirs from which obligations to the Lower Basin could be met, avoiding curtailment. There are many barriers - legal, operational, economic, and political - that must be addressed. While it is not clear that a demand management program is the right, or the only, appropriate form of contingency plan, it does seem to be the only viable insurance policy proposed thus far.

There is also the option to wait and see, letting the chips fall where they may. In insurance terms, this would be called “going bare.” Some suggest Colorado should rely on its rights under the 1922 Compact and the operation of the prior appropriation system, rather than establishing a complicated, disruptive, and expensive demand management system. The potential economic consequences of curtailment should be carefully weighed in any decision to forego demand management or other forms of insurance. Analyses of the impacts of reduced water supplies caused by drought suggest losses to Colorado’s economy of tens of millions of dollars, as well as thousands of job losses. The difference between suffering the inevitable consequences of the operation of the prior appropriation system when insufficient water exists in Colorado streams and going bare on the risk of Compact curtailment, is that we have the opportunity with the latter to take precautionary measures in the form of demand management. Passing up that opportunity is high stakes poker.

With the number of risks described in this paper that could cause curtailment of water rights in Colorado and the Upper Basin, and the grave potential consequences of that curtailment, it seems some type of insurance policy is needed. Hoping for big snowpacks, or that our lawyers will win a court battle, leaves us in enormous peril. Hope is not insurance. We hope that our houses will not burn down, but we also buy insurance. Such protection could take a number of forms, with a demand management program at or near the top of the list.

The paper acknowledges that there are significant logistical and implementation problems with demand management, such as verification and accounting, funding, agricultural and tribal impacts, and water law barriers, to name a few. But it is incumbent on those who reject demand management or other form of proactive water conservation to base a decision to go bare on an informed analysis of the consequences or to propose a different kind of insurance alternative to the turmoil and disorder of forced curtailment. Neither has yet occurred. 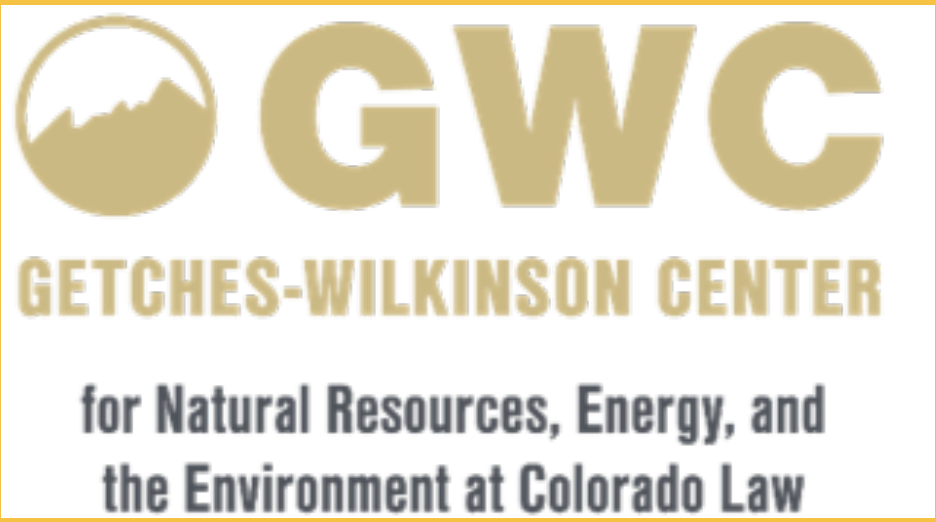