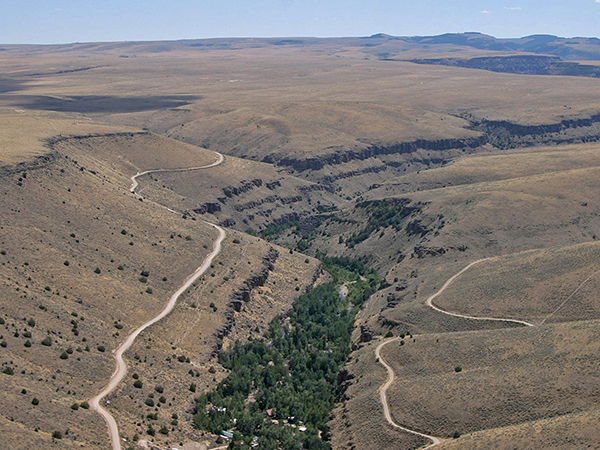 Boundary-pushing research led by Stefani Crabtree and a team of researchers from Sandia National Labs and throughout Australia that used high performance computer (HPC) modeling to map ancient pedestrian routes is the recipient of the High Performance Computing Innovations Excellence Award from the HPC User Forum and Hyperion Research for 2021.

Crabtree, assistant professor of social-environmental modeling in Utah State University’s Department of Environment and Society and colleagues used innovative techniques to project how humans moved across the landscape of the ancient continent Sahul, populating it for the first time. By simulating the decision-making of early way-finders, the team mapped probable pedestrian “superhighways.” The study is the largest reconstruction of a network of human migration paths into a new landscape, and the first to apply rigorous computational analysis at the continental scale.

By constructing a high-resolution model for Sahul and coupling it with human-aligned perspective of landscape features and models that replicate energy saving and safety-conscious decision-making, Crabtree and her colleagues used HPC to create over 125 billion potential migratory pathways, and zeroed in on the most likely to attract foot-weary travelers. “This award is such an honor,” said Crabtree. “It illustrates how the impact from this kind of work can go beyond academic circles to reach a broader community of people exploring high performance computing.” HPC is the aggregation of computing power to achieve wildly higher capacities than are found in traditional computers and servers. The approach has the capacity to process massive volumes of data at high speeds using multiple networked computers and storage devices. HPC makes it possible to explore some of the world’s biggest problems in science, engineering, and business.

This was the first time an archeological-centered study has earned the Hyperion award, said Crabtree. In the past, projects from data-heavy topics were recognized; locating planets, interpreting political gerrymandering and identifying patterns in COVID spikes. “In the Department of Environment and Society, we teach that social scientists have potential to do high-impact research that can have a real effect on people’s lives,” said Crabtree. “This is a great illustration of how that’s true. We used computing power in a transformative way to ask questions about our humanity.”

And now the information they gleaned can be applied to other human patterns too, she said … how aboriginal groups connect to human populations today, how refugees move across a landscape, or what to expect of migration patterns for people affected by climate change.” The award recognizes outstanding achievements globally that have been supported by HPC and have “significant potential benefit to humanity.” They include modeling and simulation, computational analysis, machine/deep learning, artificial intelligence, or quantum computing. Recipients range from government and academic research teams to corporations that have demonstrated a positive impact on science, medicine, engineering, data science, computer science, financial results, the HPC community, or society at large.

Coauthors on the project include: