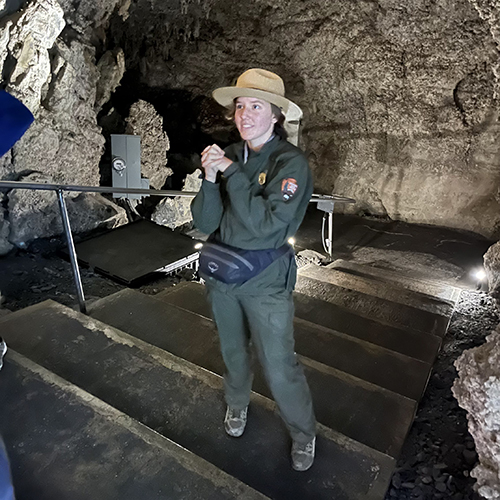 The Extended Parallel Process Model (i.e. the EPPM) works to combine fear and efficacy messages to incite productive behaviors in individuals to mitigate health risks. Traditionally, this model has been applied to the fields of epidemiology and chronic illness with varying modes of success. I will create a quantitative survey examining the impact of five different climate change messages on the perceived efficacy and behavioral intention of ~800 individuals in the United States. These messages will vary in their application of threat and efficacy information to mirror the EPPM pathways. By performing a one-way MANOVA, I will be able to determine the relationship between one categorical independent variable (i.e. message exposures) and two continuous dependent variables (i.e. perceived efficacy and behavioral intention).

This research has both personal and societal implications. On a personal level, I will learn how to perform quantitative social science methods through different software, like Prolific and SPSS. One a societal level, we can learn how to effectively induce individual mitigation behaviors for anthropogenic climate change. In today’s day, when people are stifled into inaction by eco-anxiety, it is becoming incredibly necessary to know how to convey both an adequate threat and a solution. The EPPM may be the key for communicating about crisis disciplines like climate change. 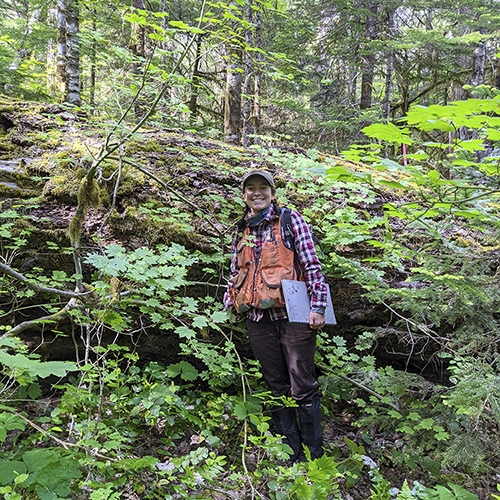 Protecting old-growth forests in a changing climate requires a better understanding of forest successional processes and relationships. This study sought to clarify relationships between conifer seedlings, logs, and moss, with varying soil moisture and nutrient availability in an old-growth forest in the southern Washington Cascades. At the Wind River Forest Dynamics Plot, logs facilitate conifer seedling establishment both on their surfaces and nearby on the forest floor; higher densities of seedlings were found near logs and on top of logs. A log index, calculated using basal area and plot to log distance, was a better indicator of seedling density than just distance alone, suggesting that multiple factors may influence seedling establishment. Moss inhibits seedling establishment in the area, but this may be limited to areas with water competition. More research is needed to determine the relative importance of the factors. 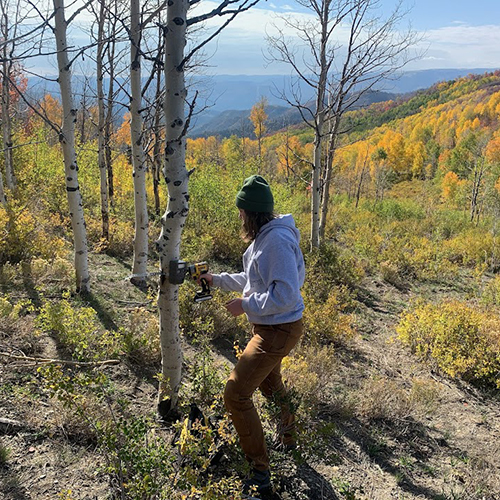 Due to their cost-effectiveness, wildlife cameras have become an increasingly popular tool for estimating population densities. Previously, this technique relied on ‘capture-recapture’ models that utilized re-sightings of individually marked animals, but in recent years researcher have developed methods to estimate population densities of unmarked animals. One such method is the random encounter and staying time (REST) technique. To evaluate the accuracy and precision of the REST method, I compared cattle density estimates based on trail-camera photos to the actual number of cattle stocked on a U.S. Forest Service (USFS) grazing allotment. Our results show that our estimates were typically 50-350% higher than USFS rates, but I have little confidence in the reliability of the USFS records as the cameras detected cows in places and times that no cows should have been in based on USFS records. Using the calculated cattle densities, I will predict where cattle tend to aggregate on the grazing allotment using environmental factors such as slope, distance to water, NDVI, and percent cover of different vegetation types. This will allow managers to understand how cattle tend to aggregate on the grazing allotment and where to focus cattle management efforts. 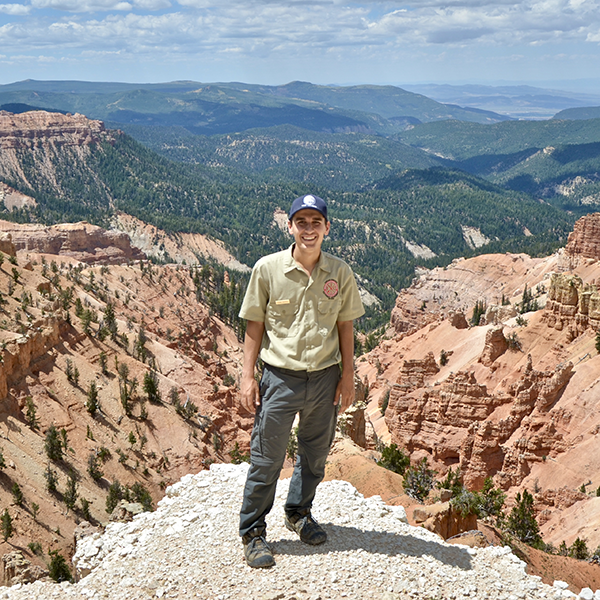 Cedar Breaks National Monument, UT is host to numerous types of vegetation and climate. Forests, meadows and unique ‘redrock’ habitats created by the Claron sandstone formations of southern Utah allow for rich wildlife resources. To date there has not been a formal fauna inventory of this area (B. Larsen, National Park Service, personal communication). The objective of the Cedar Breaks National Monument camera survey is to gather data about the monument’s wildlife distribution and analyze patterns associated with the available habitats. The proposed study will survey the habitats along the rim of the half-mile deep geologic amphitheater as well as below and in the amphitheater. The data and study results will be used to create tangible interpretive material about Cedar Break’s wildlife distribution. The data and study results dealing with species distribution across varying habitat types will be provided to park officials to allow for informed administrative, resource, and maintenance decisions involving wildlife. The survey will be the leading authority of wildlife density and distribution in Cedar Breaks National Monument as no previous systematic study has been completed. 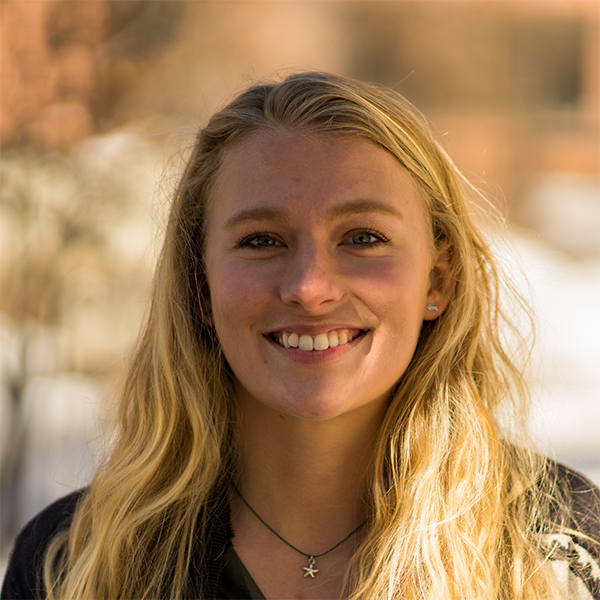 Utah Lake has been experiencing algae blooms for decades, with severe negative consequences on the health of its ecosystem. The cause of these algae blooms is not completely understood. Very little is known about the controls of eutrophication in this lake, and whether the high eutrophication levels have persisted over time due to internal nutrient loading. The purpose of this project is to inquire and gain information about the controls of eutrophication in Utah Lake. Benthic algae (periphyton) is one possible control of internal nutrient loading, and understanding the dynamics of periphyton in Utah Lake may potentially lead to more effective management solutions. Although it may play an important ecological and water quality role in Utah Lake, the extent of periphyton production in the lake is unknown, and Utah Lake’s periphyton communities have never been manipulated or studied in a controlled lab setting. Once light and temperature conditions for optimal periphyton growth are attained, the results of this study will be advanced by another, broader study to test whether light limitation of the periphyton production communities can lead to high nutrient fluxes from the sediments in the overlying waters. 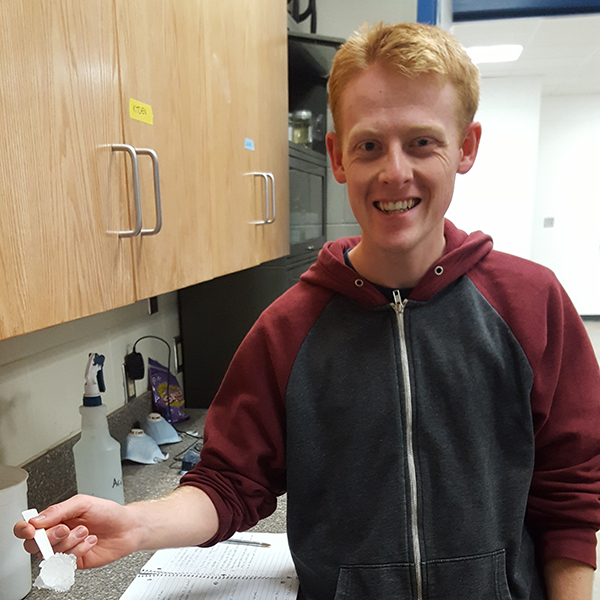 The invasive grass Phragmites australis has invaded wetlands near the Great Salt Lake, which has caused a decline in native plant species like alkali bulrush (Bolboschoenus maritimus) that are important for birds. Wetland managers are interested in restoring areas that have been cleared of Phragmites with native species. However, getting those native species to germinate, grow, and fend off future competition from Phragmites is difficult, especially if water becomes more scarce due to human water withdrawals and climate change. My research project focused on a surfactant seed coating that has aided germination of upland plants by increasing soil moisture availability. 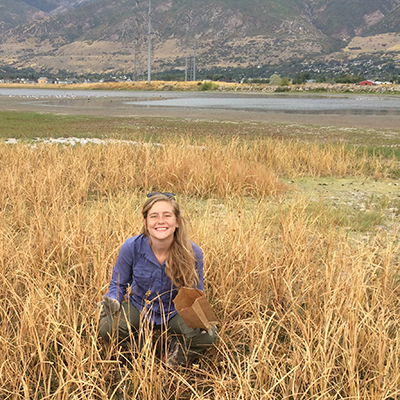 Great Salt Lake wetlands provide a number of invaluable ecosystem services. Recent spread of the invasive species Phragmites australis has reduced the cover of native wetland species that are instrumental in providing these ecosystem services. Alkali bulrush is a native species that has proved difficult to reseed in Great Salt Lake restoration sites due to a physiological dormancy. One method of breaking seed dormancy is cold stratification, which is a process that occurs naturally during the winter as the seed sits under cold, moist soil. There is still much uncertainty concerning the length of cold stratification that will be effective at breaking seed dormancy. My research project examined the effect of various lengths of cold stratification on alkali bulrush seed collected from five wetland sites. The project results showed promising evidence that cold stratification plays a role in breaking seed dormancy, but germination rates remained much lower than expected after more than 6 months of cold stratification treatment. There did appear to be some effect on the germination rate depending on where seed was collected from. Additional research is needed to determine the factors impeding the germination of alkali seed.